Regarding Unverified Displays on iPhone 11

Regarding Unverified Displays on iPhone 11

As iPhone 11 repairs become more common, repair technicians are starting to notice the dreaded “Unverified Display” Notification. Discovered around this time last year, the notification appears specifically on iPhone 11 series phones following a screen repair. And while it’s been known for a year now, the fact that it only affects 11 series phones and later means that most technicians are only starting to come across the issue now. So what is this exactly, and what can be done about it?

As mentioned before, this is a notification that pops up following a screen repair on 11 series devices (and newer) running iOS 13.1 (or higher). Once the device is booted with a new screen, the user is greeted with a pop-up notification that reads “Important Display Message: Unable to verify this iPhone has a genuine display.” The notification will also be present on the lock screen for 4 days, and highlighted in the Settings app for 15 days, after which it is permanently located in the Settings app under General > About.

It should be noted that this does NOT affect the proper functionality of the new display. It is strictly a notification about the status of the screen.

The notification places itself in several prominent locations (images via iFixit).

Why has this been added?

According to Apple’s official communication on the matter, “The iPhone display is engineered together with iOS software for optimal performance and quality. A nongenuine display might cause compatibility or performance issues. For example, an issue might arise after an iOS software update that contains display updates.” However, the communication also cites risks of improper installation and safety issues arising from unauthorized repair providers. This combined with the fact that the notification still appears on original displays pulled from working iPhones, hints that this is actually just another anti-repair stunt.

What can be done about it?

Unfortunately, there isn’t much that can be done to fix the issue. All iPhone displays, original or aftermarket, are affected by the notification, and logic programmers used for True-Tone do not remove the issue either. However, a few skilled technicians online have discovered that the device pairing data is stored on the display’s touch integrated IC module. So if you possess board-level repair skills, then it is possible to remove the notification by transplanting the original touch IC to the new display. But be aware that the chip can only be transplanted to refurbished screen replacements that use recycled displays, since aftermarket displays use a different FPC pin layout under their IC chips.

We must stress that this is a very complex process, and do not recommend it for techs who are inexperienced in BGA soldering. Additionally, the process requires grinding away the IC on the replacement screen, which if done incorrectly, can permanently damage it. While the solution does work, it’s somewhat impractical, given that the screen’s functionality is unaffected by the notification. 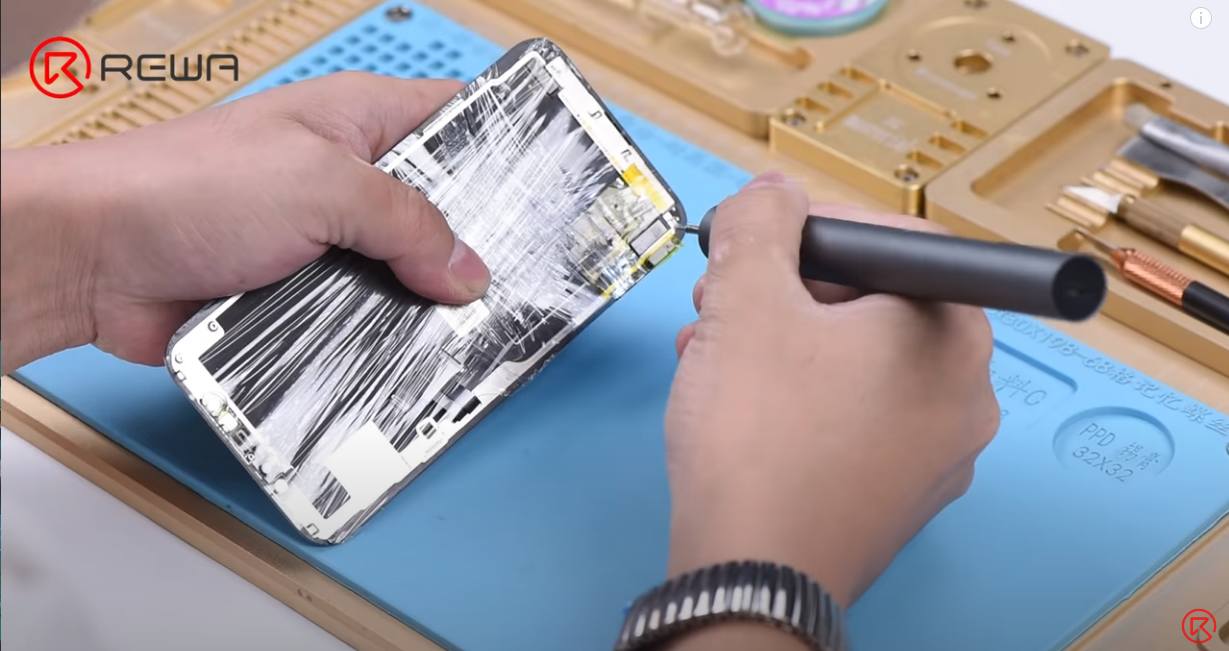 The IC transplanting process requires grinding away the IC on the replacement screen with a rotary tool (video via Rewa).

Where do we go from here?

Since the only existing solution is impractical for most situations, we recommend using the opportunity to educate end-users about the facts behind Apple device repair, and how Apple’s explanations seldom align with the realities of our industry. We believe that customers ultimately do want local, inexpensive repair solutions for their devices, and are willing to support independent repair providers, even at the expense of minor annoyances. Furthermore, as Apple continues to make questionable design and user-experience decisions, their user-base becomes more and more aware of the (in our opinion) absurdity of the justifications for those decisions. From screen-replacement error messages, to underclocking old phones, and the recent battery lockout and screen notification issues, iPhone history is full of examples of Apple making life hard for both users and repair professionals alike and then claiming that its in the best interest of its users. Over time, that awareness makes consumers more comfortable with aftermarket alternatives and independent repair. So it’s not all bad, from that perspective.

One last note- the fact that the device pairing data is located on the Touch IC is a relatively recent discovery. It is possible that future logic programmers will be able to transfer this data (in the same way that logic programmers are used to restore True Tone). It should be noted however, that Apple uses a different approach involving a connected Macbook and its RepairCal software suit. So if a logic programmer solution doesn’t become available then we’ll just have to hope that Apple caves under Right To Repair pressure and removes the notification themselves (though it’s probably unlikely). In any case, we’ll be sure to let you all know as new developments arise, so please continue to follow us here and on social media.

We hope this article was helpful to you. If you have any questions, please feel free to leave them in the comments section.