How Durable is iPhone 12?

If you’ve been following the annual release of new iPhones, then you are surely used to hearing claims like “strongest glass ever in an iPhone.” Well this year, it’s not just marketing speak. As we mentioned in our last post, Apple has incorporated Corning’s new “Ceramic Shield” onto the front of the iPhone 12 series, allegedly making it’s screen glass 4x more resistant to damage. Furthermore, they claim their new angular design brings added strength to the device. But how do these phones actually perform in practice? We’ve turned to YouTube for the answer to this question, and rounded up the results from several channels to get a better understanding of what the phone can take. 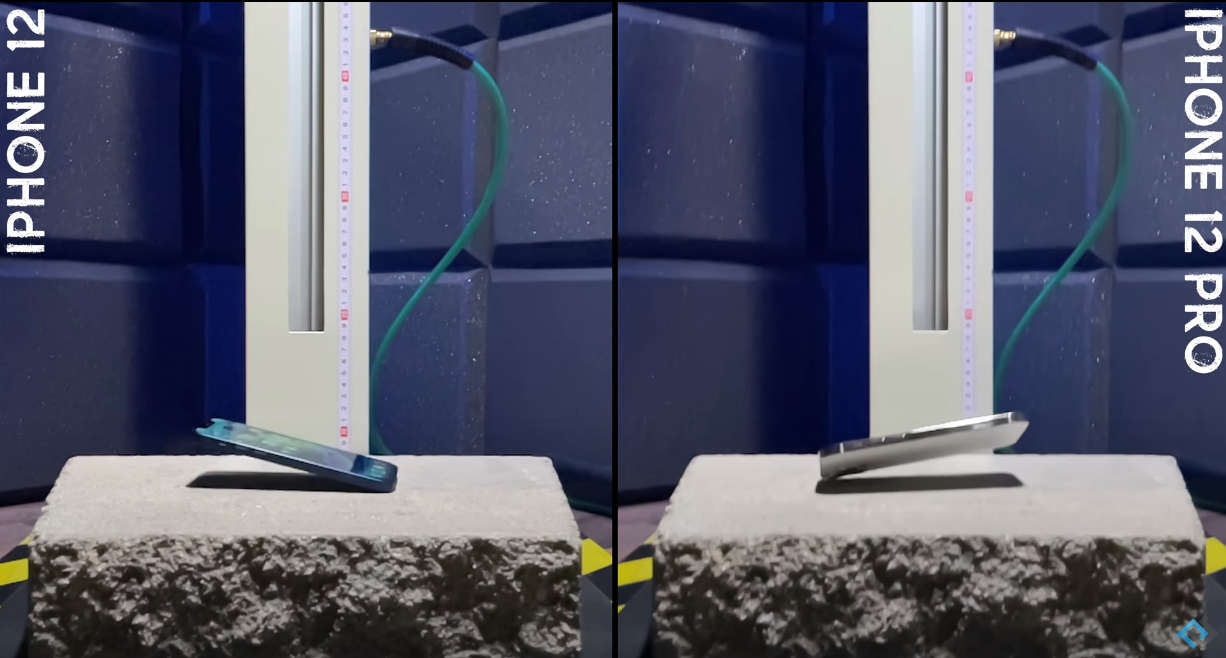 A machine drops both an iPhone 12 and 12 Pro onto a concrete block in PhoneBuff’s test. Image via PhoneBuff on YouTube

PhoneBuff’s test is fairly straightforward- One 3’ drop onto a concrete block, followed by ten 4.7’ drops onto steel, and then a bonus 4.7’ drop onto concrete. This particular test is quite impressive, as both the 12 and 12 Pro screens survived all 12 drops. That said, there was other damage… the 12’s back glass broke on the first drop, while the 12’s camera eventually shattered one of it’s internal lenses during the 4.7’ drops. 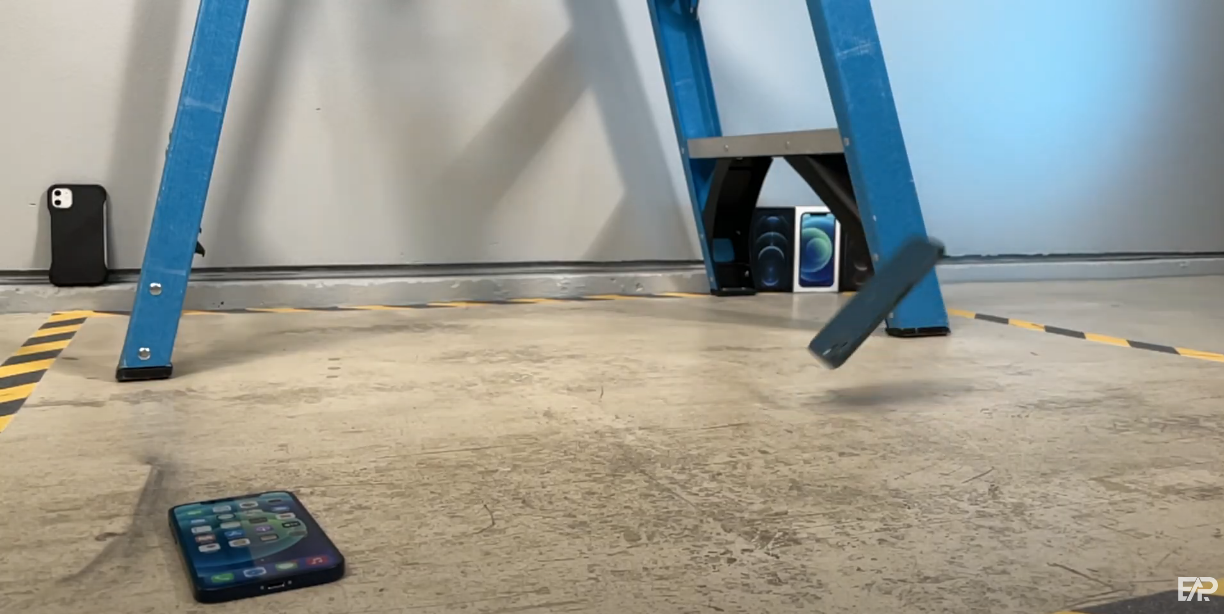 This test takes things further by dropping the phones from three different heights and from three different angles (corner, back, and front) onto a warehouse floor. The first was from waist-height, which only resulted in scuffs and scratches to the frames. The second drop was from head-height, which only added dents to the frame, and two small lines of dead pixels on the 12 Pro. Last, was a 10’ drop, which shattered the back glass on both phones, damaged the cameras on the 12, and left several cracks in the lower half of the 12 Pro’s screen. The 12’s screen remained undamaged.

Result: Broken back glass, cosmetic damage to frame, broken camera on 12, and dead pixels and broken screen glass on the 12 Pro. 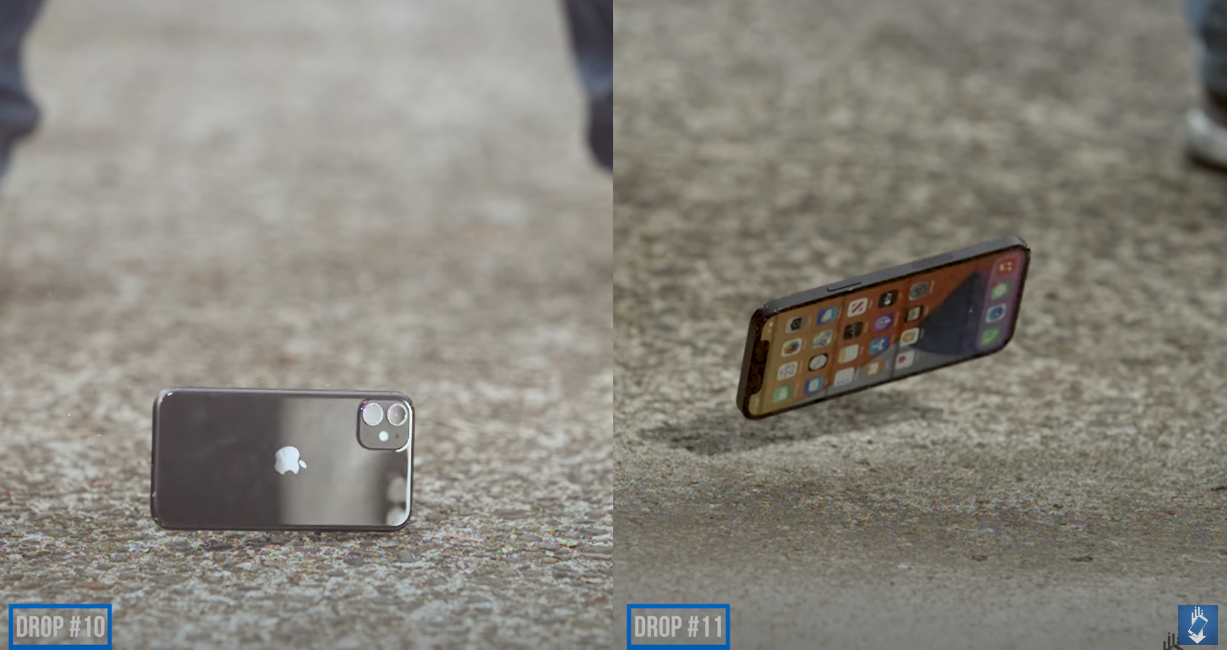 The unique thing about this drop test is that it’s shown side-by-side with an iPhone 11. Image via GizmoSlip on YouTube.

While informal, GizmoSlips’ tests are probably a bit more indicative of what we can expect to see from accidental drops- shoulder-height drops (from several angles) onto a rocky cement driveway. Impressively, all of his initial drops failed to produce more than cosmetic frame damage and a small chip in the screen next to the frame. So he performed a second face-side drop, which (curiously) shattered the back glass of the phone but left the screen undamaged. It wasn’t until the third drop that damage finally occurred to the display, cracks in the left with hairline cracks along the entire front. 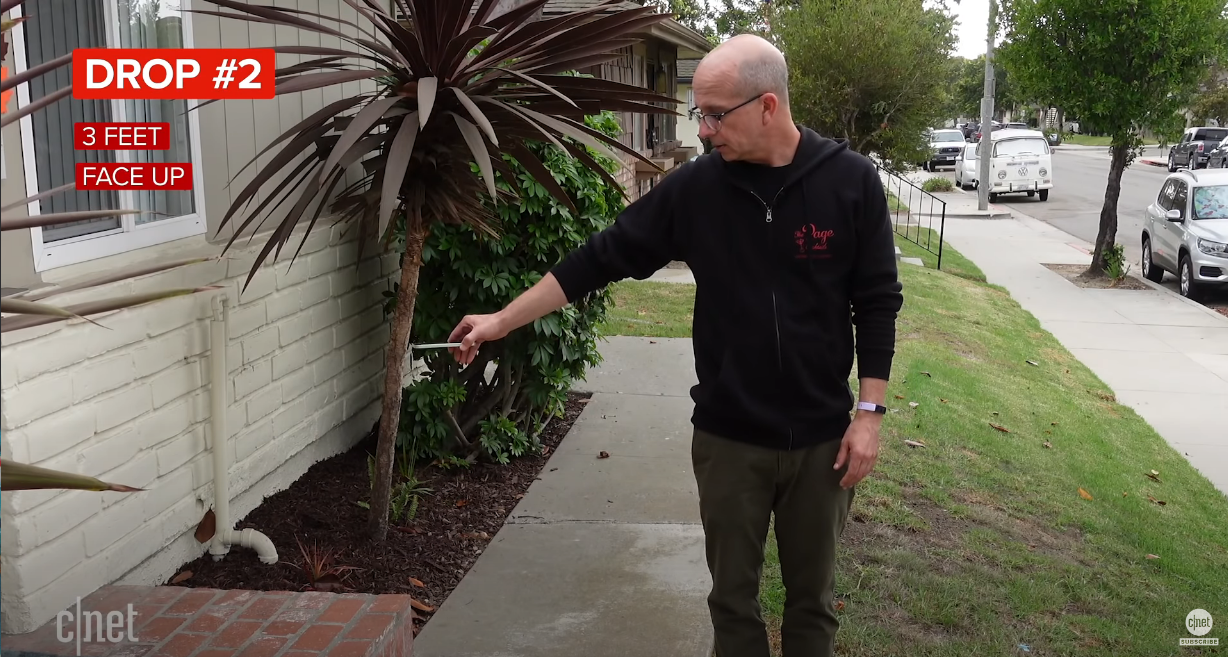 Cnet’s test is simple, but produces impressive results. Image via CNET on YouTube.

Cnet’s test is also pretty close to real-world, as they consist of several 3’, 6’, and 9’ drops onto a cement walkway, in that order. The first set of drops resulted in cracks in the back glass, and some light cosmetic damage to the frame. The second produced chips in the aluminum frame of the device, but still no screen damage. The final drop set, created more frame chipping, but still failed to break the glass. Not bad! 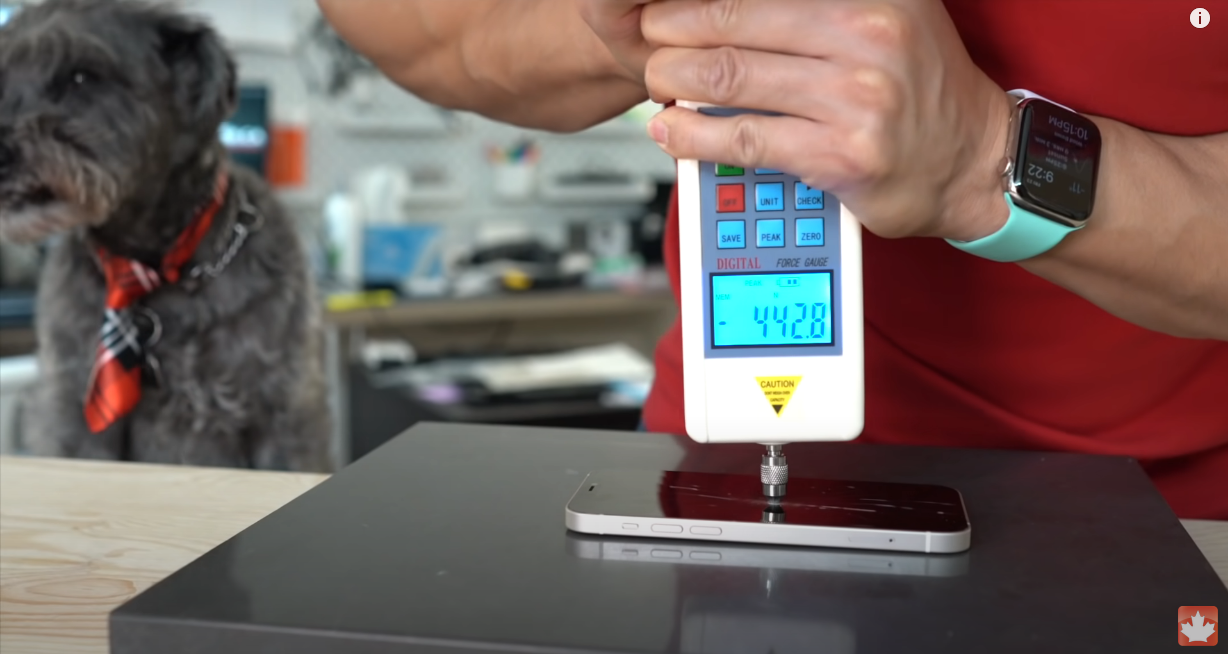 If you’re wondering why Ceramic Shield performs so well, then MobileReviewsEh has you covered. In his test, both the iPhone 11’s glass and iPhone 12’s glass are tested using a digital force gauge. Both screens eventually shattered, but it took 442N of force to shatter the iPhone 12’s display; roughly 100N more than was needed for the iPhone 11.

Unbox Therapy takes their typical unboxing a bit further, with a bend test. Image via Unbox Therapy on YouTube.

For this final test, we turn to something a little less flashy- a bend test by hand. And while it may not have the same entertainment value as dropping phones off ladders or driving a spike into a display, it still is pretty impressive. Here, the host puts on glass-handling gloves and makes several attempts to bend both phones- with no success. Clearly, Apple has made progress since the days of bendgate on the iPhone 6.

Results: No damage on either device.

The iPhone 12 series is, without a doubt, the most durable iPhone Apple has ever produced. That being said, the phone is far from indestructible, and other components like the back glass, OLED, and camera are still easily damaged. Nonetheless, it’s impressive how well Ceramic Shield performed on all of the tests. In almost every example, it takes repeated attempts to produce damage to the screen, and in some cases, no damage was achieved. And while it may still be a long-way off, one can imagine a future where screen replacement isn’t the primary service offered at repair shops.

What do you all think? Does the iPhone 12’s durability impress you? Do you think Ceramic Shield can withstand the kind of damage your customers bring in day-to-day? Let us know your thoughts by leaving a comment or reaching out to us on social media!